ory of how he entered our world…
Our firstborn, Samuel, now 2 yrs 9 months, arrived 6 days before my estimated due date, so I was convinced that our second-born would be early too. This turned out to be wishful thinking as I approached 40 weeks with discomfort and sleepless nights.
On Monday 10th, after another uncomfortable night, I rang Bella Mama for a last-minute massage appointment. I was in luck and enjoyed a pampering by Jo and her new therapist, Basil.

The next morning at 4.30 am, 5 days after my EDD, light contractions started. Whether Jo’s massaging of specific pressure points kick-started the labour, or whether it would have happened anyway, who knows – but I was relaxed and ready, excited in the knowledge that we would soon be meeting our little boy. The first task was to attach the Tens machine (So we hired Tens Machine from Bella Mama).

I called my midwife once contractions were 10 minutes apart (around 8.30 am) but we decided I wasn’t yet ready to go into hospital. They slowed down when I sat down to do some computer work, and my midwife advised walking up and down some hills to get them going again – so off my husband and I went! Over the next hour or so, the contractions increased in intensity and got to about 7 minutes apart, so once we were got back home, I called my midwife again and said I felt ready to go in. (We were expecting it to be a relatively quick birth and there was no way I wanted to be caught out in the car!) A quick shower and a final check of the bags, and we were on our way, with my mother lined up to collect Samuel from daycare that afternoon and look after him until further notice!

At 11.45 am, I was admitted to exactly the same birthing suite at North Shore Hospital where Samuel had been born. My contractions slowed down a bit as we got ourselves settled and my midwife broke my waters, but before long they were back on course and labour started in earnest. Benjamin’s heart rate was monitored between contractions and all seemed well.

I was happy leaning on the bed during this stage of the labour, intuitively rocking back and forth, using gas and air to help me through the contractions. It also helped to shout when exhaling during the contractions – not a shout from the throat but a real guttural noise – something Jo had told us about in yoga – I recall being quite surprised when I did this during Samuel’s birth; however, it appeared to be my natural way of coping with the process, so I was more prepared for it during labour with Benjamin.

By around 1 pm I entered the second stage of labour, I got up on to the bed and lay reclined on my back – a comfortable position for me when I had previously given birth – and started pushing. The gas and air – as well as my husband’s forearms to grip and pull on! – remained invaluable. After an hour or so, my midwife consulted the hospital midwife and the registrar, as Benjamin wasn’t progressing as we had expected.

The registrar confirmed that he was still in the ‘OT position’ (occiput transverse position – head turned sideways). Whilst most babies start labour in this position, they then usually turn to posterior or anterior facing during the second stage of labour.

There was some discussion of a possible ventouse birth, but the registrar was happy to wait and see if Benjamin would turn as I pushed, which he did. At 2:40 pm, Benjamin was born and immediately placed gently onto my stomach for a cuddle, covered with a blanket. Those first few moments were magical. This tiny wrinkly bundle I had grown and nurtured inside me over the past nine months was nowhere, lying on me, still attached, eyes closed, and happily squirming on his mummy’s tummy. And those magical moments have never stopped…

We remained skin on the skin whilst my husband cut the cord and I completed the third stage of labour. After a while, Benjamin was weighed and dressed, ready for more cuddles with Daddy and Mummy. Due to complications after Samuel’s birth, a precautionary dose of Syntocinin was intravenously administered to help my uterus contract. My husband and I were then left alone in the birthing suite to wonder at and bond with our little miracle.

Jo often talks about the best place to birth is where you feel safest and most secure. For some people that place is at home; for me, that place was a hospital with a midwife in whom I had complete trust. Continuity of care is a fantastic reality here in New Zealand – mothers are able to choose a midwife with whom they feel comfortable, build a strong relationship with them over 9 months of pregnancy, knowing that their midwife will be with them every step of the way.

That shared knowledge of the preferred birth plan, postnatal wishes, and so on, affords the mother a degree of confidence, thereby reducing the anxiety before and during labour. My midwife, and the hospital staff, gave me options at every turn, and I certainly felt their aim was to avoid intervention where they could. This was something common to both my birth experiences and I wouldn’t have had it any other way.

We were discharged from the hospital at 6 pm the same day (a very different experience from my first birth, after which I had spent 3 days in the hospital – receiving fantastic care whilst there), and soon on our way to the wonderful facility that is Warkworth Birthing Centre. What a fabulous retreat for mothers and their newborns! With 24 hr midwife care, delicious meals, and a peaceful environment, Benjamin and I were able to bond; and I was able to get some rest, before returning to everyday life at home.

Life with Benjamin… On one hand, the past 5 weeks have gone so quickly; on the other, it feels like Benjamin has always been in our lives. We have slowly got ourselves into a new ‘routine’ (in the loosest possible term!) and are adjusting to being a family of four. There is no doubt I am more relaxed this time around – you don’t have much choice with a 2.5-year-old running around wanting attention! – and that is certainly helping Benjamin be such a settled little thing, I am sure. Also, my own post-birth recovery has been far quicker than I experienced last time, which has been a pleasant surprise!

I feel incredibly fortunate to have had two good birth experiences, and I am in no doubt a number of things have contributed to that – feeling well informed prior to the births; being confident that I made decisions that were right for me and my family; getting support from various sources such as my family, my midwife, the hospital and Jo; sharing the experiences with my husband; and, of course, my body which somehow knew what to do!  Life is just wonderful, and I am so excited about our future as a family of four! 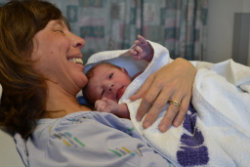 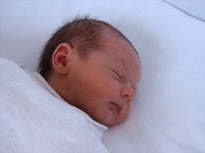 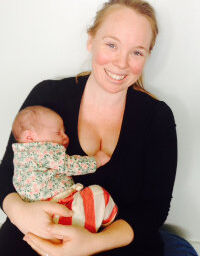